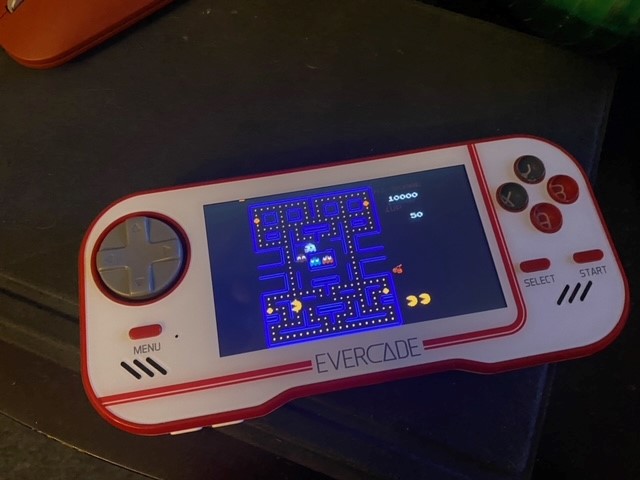 Hi. Brian here (aka ‘ballistikcoffeeboy’.) I’m not your typical tech reviewer. I also happen to be a huge vintage video game fanatic. Throughout my 40 plus years, I have been entranced by vintage gaming systems such as the Atari 2600, the Texas Instruments TI-99/4A, the Tandy 4000, the Atari 5200 and 7800, Atari XEGS, the Commodore, and more. When I heard last year that there was a new handheld gaming system by this UK company called Blaze that played its own proprietary vintage video game cartridges, I HAD TO HAVE IT. Well, nearly a year after obtaining this marvellous handheld, I’m not ashamed to admit, like many YouTubers have, that I’m smitten with this little device.

What is the Evercade? The Blaze ‘Evercade’ is a portable arcade player that utilizes its own ROM cartridges which emulate many popular (and not-so-popular indie titles) and display it on a nice color screen. The Evercade is 7 inches long, has a horizontal 4.3 inch LCD screen, and the screen has a 16:9 aspect ratio, which is suitable for these purposes, and runs on Linux. The game cartridges often come out every few months and some feature as many as 20+ games, while some just have 2, or 6, or a handful, depending up the theme of the cartridge, usually featuring one particular company’s games. I purchased the Starter Deluxe pack, which came with the Evercade, the USB Android charger, and 3 games – Atari Collection Volume 1, Interplay Collection Volume 1 and DataEast Collection Volume 1.

The system also features a 2,000 mAh battery which lasts about 4+ hours. The system features a headphone jack, a USB charging port, two volume buttons, the power button on top, and a port on top which is a mini HDMI port for replicating your game on a TV screen, but I have to be honest and say I have not tried that feature, since I’ve heard if your system is plugged into a TV while playing, you may lose the game. I just dont see the benefit of that feature, too, since I’m literally surrounded by a ton of plug and play TV arcades and collectible systems which are already hooked up to my TV, and my XBox. However, according to Blaze, when plugged in, the system upscales your screen to the TV in high-def. I don’t own the official Evercade case but rather, use a Thule tech bag to carry mine in, and it also can store all the games (18 so far).. take a look around the web for those; you can find carrying cases that are larger since the official one is tiny and just holds the unit itself. By the way, you can save and load your progress on each game in a series of ‘slots’, and each game has several, so for me – that is also a huge winning point of the unit. The ability to ‘save for later’ is great, especially in our day and age of short attention spans and wanting to save scores and progress for later. This is something most of the old home consoles could never do, save for the NES and some of its games having ‘save codes,’ which usually don’t work anymore on the original units using the original old game carts. The Evercade is fresh, brand new, presents the vintage games in a new way in which the games original origin is honored in beautiful glory.

How’s the Namco cart? Namco Museum Collection 1 is a collection of Namco-branded video games, which include NES versions of these games. Note: these are NOT the arcade playable versions, which will be featured in future consoles and cartridges released by the company. (That’s another story for another time. Google ‘Evercade VS’ home console… which is also a pretty danged cool full-fledged home console and Evercade portable docking station solution!) The games included on this cartridge, however, include: Battle Cars, Dig Dug, Galaxian, Mappy, Little Rabble, Mappy Kids, Metal Marines, Pac-Man, Quad Challenge, Xevious and Star Luster. My favorite games in this collection (from my childhood, of course, and now) are Pac-Man, Mappy, Galaxian and Dig-Dug.

Using the Evercade System: When you insert the cartridge and turn the unit on, you are greeted with the Evercade logo and it’s 80’s movie theater promo logo alongside a very 70’s sounding futuristic theme. When the game starts, you are presented with a plethora of screens, each of which feature the particular games on the unit, listed from A-Z. The games are NES ports, for sure, but they run well, and the buttons are super-clicky and feel nice. There are also a right and left button on the top rear of the unit, plus a four button configuration for movement controls within the games. There is also a pause button along the bottom and a start button, although, at times, they do or don’t seem to work as expected. The games are great but sometimes, I had a hard time in Pac-Man maneuvering corners and such using the 4 way control pad on the left of the unit. Sharp turns seemed almost impossible at times, but you kinda get used to that to some degree, and on most games this isn’t an issue, I found. However, with those two shortcomings, the games run great – no doubt about it. These little cartridges also come with complete hard plastic boxes with cover art, and most of the games feature nice full-color manuals inside. Some of the games even come with mini-posters inside and other fun gems.

Sound, TV Upscaling & Game Boxes: The sound on the system seems nice.. not too loud, not too tinny. (Ok, maybe a little tinny. These aren’t Dolby speakers, for sure.) The sound on the system is adequate for me, and sounds even better when using headphones or other devices you can plug into the headphone port. This system does not utilize wireless, so you can’t use a wireless set of headphones, for example. It truly is a retro system. Although, keep in mind, you can plug in the HDMI jack to a TV to replicate the image on a TV and play that way, just make sure not to plug it in while playing, or you may lose your game. The variety of games on each cartridge are truly amazing, as is the cover art and manuals inside the boxes. I was truly blown away by the care it took to make these – nearly each game on each cart gets its own full color page or two, with great artwork from the original arcade and home video game releases at the time. I think one collection even came with stickers inside! I look forward with baited breath each time a game is coming out. Here in America, you have to order an Evercade (either solo or with a Starter Kit or Kits) at Funstock in the UK or VGP in Canada. You can find these companies online by doing a simple search. Most cartridges go for around $20-25 new, but used – some of the games can cost you a pretty penny on eBay if they are sold out or hard to find. Look around for the best deal, and you won’t be disappointed.

Who is this for? The Evercade is an amazing device, especially for a retro gaming lover like me. They have also released cartridges for Jaleco, Piko Interactive, the Atari Lynx, the Oliver Twins collection (a popular european series of platformer games in the vein of Mega Man), the Atari collection, InterPlay, and many many more. Would I recommend the Evercade? YES! Especially to vintage video game lovers everywhere. For younger kids who may not like these types of games? I wouldn’t recommend. I would if they are interested in getting into vintage gaming, but most kids these days would rather flock to their Nintendo Switch or Xboxes. This gaming system is more for the vintage video game lover, much like myself. I can understand why vintage gaming fan-boys might oogle over this system. I don’t oogle over it, but it does look cool and feel pretty solid in the hand. As someone who is a lover of the original consoles (and I collect them, for sure, especially Atari), this is a great portable substitute to take on the go or play few rounds on the couch sitting upside down with one sock hanging off. *insert geeky chuckle*.

Other Cart Releases: One of my favorite releases besides Namco Museum is the Atari Lynx collection, which gives us a great selection of Lynx games which are mostly lost in the mists of time. I never owned a Lynx and still don’t (I was a NES fan at that point, and nowadays the Lynx itself goes for hundreds on eBay) but this a great way to introduce those games that are lost in time to a new generation of players (or to old fogeys like me who never got to play them.) The image above shows Battle Cars, from 1993, which is part of the Namco Museum Collection 1. Battle Cars is also a pretty fun game. That’s one of the reasons I love this particular collection, and Volume 2, because these games are amongst my favorites, including City Connection on the Jaleco Collection. There are literally so many games jam-packed on most of these cartridges, that $20 seems like a drop in the bucket for each cartridge. Apparently, Blaze works with each game publishing house to produce the best possible ROMs and include the best possible images and info in each collection’s manual, which are produced, as I said, with tender loving care. What an amazing system!

My Score & Where to Buy: I would give this unit an A+, and you can purchase the Collector Pack, still, in August 2021, for $236 USD from Funstock.UK, but this also includes the unit and 10 games in their plastic cases. This deal also includes the Evercade carrying case. The starter pack I have cost about $100 with the 3 games and I purchased it a year ago from VGP (Video Games Plus) in Canada, which is another good retailer. Amazon and eBay are also good sources to buy from, but their prices tend to be more inconsistently expensive. Like I said.. find the best deal, pre-order the new carts if you become obsessed like me, and receive the new games (usually released 2 carts at a time, every few months) through an online retailer – and you can receive the game the same day it’s universally available, for a small shipping fee. Funstock is located at: https://funstock.co.uk/ and VGP is located at: https://videogamesplus.ca/ . These sites are both outside the U.S. but I’ve reliably ordered about 10 games from them over the past year and they arrive pretty quickly. The websites are completely legit and real, and stock seems to be low at the moment – with systems sold out and only a few scant packages left. Time will tell if stock is replenished or if these are one and done systems.

Wrap Up. The Blaze Evercade is a great system. Buy one today! No plugs or endorsements here – this is simply from a fan of vintage gaming who happens to aboslutely adore the tender loving care given to the style and feel of this system, from the nice big red 80’s buttons to the red stenciling on the system’s front. Blaze, you’ve done an incredible job, and I’m super proud to an Evercade fanboy, at the ripe age of 46!